Eden was built in 1924 in Groningen in the Netherlands as a "LUXURY MOTOR" called the Eben Haezer, 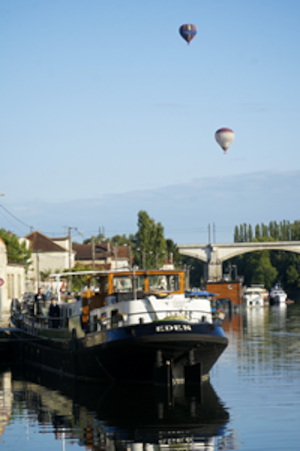 She was 28 metres long and 4.99 metres wide, and at that time carried up to 168 tons of goods. In 1964 she was extended by 8 metres to carry 228 tonnes. It was in 1996 she ceased all freight transport activities. In 1999 Arna and Theo, a couple who had fallen under her spell, decided to buy her and transform her into a beautiful canal boat and very pretty cruise ship. The Eben Haezer was renamed Antonia. In order to improve your comfort Florence and Christian completely refitted the Antonia.The cabins, saloon, dining room were refurbished with a different atmosphere and new furniture, air conditioning, generator, bow thrusters and a Jacuzzi were added. For your comfort Wi-Fi is available as well as board games.Mademoiselle "Antonia" becomes Madame "EDEN" in honour of the canal boat of Florence and Christian's grandparents.